Here we are on the brink of what I heard being called 'the teenies', an occasion to deliver my traditional New Years Address. To many this new decade means a step closer to their future while others are already living in it. None of this in Dolphin Address. Recently, I read an American senator say that a dolphin has the attention span of a three-year-old. So if you want to understand a dolphin you have to live in the present.
Read on
Dolphin Address 2009
Hello visitors

Since I can build my workshop behind the bus I have done this nearly daily for the past weeks. This suits me perfectly though the days are fairly short. For the past three mornings the meadow has been white with frost and nearly so were my fingers. I warm them on a mug of tea after I have set up the tent. Just about then the sun peeks over Slieve Elva and warms my little workshop.

I so love my hands to go up in the work while my thoughts wander through my memories.

And then, looking up, I see the grand plan again. Then I imagine my arms to be the flippers of a humpback whale, that my feet have grown into a fluke, that I weigh some forty tonnes and what a superb splash I can make. Instead of fireworks.

And what I would like for myself, I wish to all visitors of Dolphin Address:
A flying New Year!

Read on
Dolphin Address 2008
Hello Visitors,
It may seem nothing much has happened on ‘Dolphin Address’, but it’s just like early spring: you don’t notice anything yet, but you know that under the ground there is a lot of milling around.
The first ‘Dolphin Address’ shows why it’s only the first, and quite a few things are going to change. The German version is going to disappear entirely. She has lain bare for nearly two years and the freed space will be used for other things. The ‘Tourist Stories’ will be postponed for lack of tourists and instead longer stories will run every three weeks. Also a few navigational issues will be changed.
Dusty remains the core of the site, but all the same there will be room for other pleasantry.
Stay tuned, enjoy, Jan
Read on
Dolphin Address 2007
This year we start in sobriety, as my camera is still in Oldenburg and I am in Eindhoven. When we come together again we'll make it up. A better New Year to all of you!
Jan
Read on
Dolphin Address 2006

While the third week of the new year already scores an average website visitor stat of 184 per 24 hours (welcome aboard from all over the world) in the half-darkness of my old horse shed I am working on the foundations of the 'WaterWing Research and Development Centre'.
Read on
Dolphin Address 2005

‘Why Berlin?’ everyone asks, ‘what has that got to do with dolphins?’ ‘Nothing’ I answer on the ball, ‘except that it rhymes!’
Within 3 years I had to two times leave my home. In summertime I have been living in my car in Ireland for 12 years, but this is only do-able for about four months. The year before last I met Verena there and in winter several times joined her in Berlin.
Read on
Dolphin Address 2004

Since 1992 I have been swimming every summer with dolphins in Ireland. Until 2001 I went to Dingle, where, just outside of town, in the porch between Dingle Bay and Dingle Inlet, at the cliffs of Sladeen, Fungi has his refuge.
My very first image of him was quite overwhelming. He swam under me, making turns over the seabed, throwing a savage trail of sand. The second time I went in, we swam a few minutes loop, much to the amazement of the experts present.
Read on
Dolphin Address 2003: Goodbye

Dolphin Address 35
September 18, 2003
In the past week almost daily dolphins have been seen near Dusty's aquatorium. Veronique told me she had seen that Dusty swam with a group with calves into the direction of the Aran Islands.
She could identify Dusty by the white scar on her dorsal fin that she got from the propeller of a speedboat last August. This is on her right and because this side is turned away from the shore when she is southbound I doubted this observation, all the more because until now she always seemed to avoid other dolphins.
Read more of this and other Dolphin Addresses
'Irish Dolphins' 2002
From May until September 2002 I spent most of my time swimming with a friendly wild dolphin. She is commonly known as 'Dusty' and lives off the coast of the 'Burren' in Ireland. I sought to communicate with her initially through my swimming gear, a monofin and a pseudo-pectoral 'waterwing'. Addressing her thus I hoped to learn more about her dolphin ways. This resulted in a series of reports.
Read on
Stories
Read on
Hippie Love 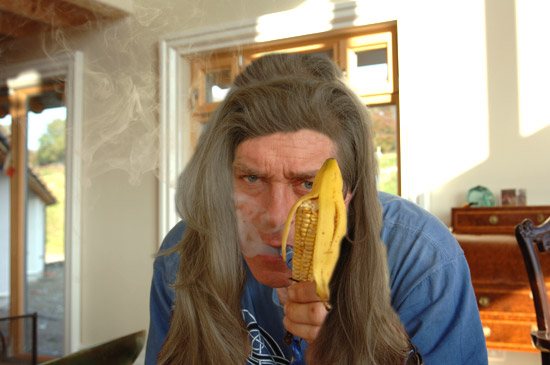 Read on
Biography
As a child, if I had one ambition in life, it was to become an explorer. Before properly studying anthropology, I waywarded into ethnomethodology, and then my bipolar disorder kicked in. As this did not allow me to continue with my study, I started sculpting in wood. Between oceans of misery came continents of divine inspiration. The first ten years were of an explorative nature indeed.
My subjects mainly originated from my garden: insects, slugs, butterflies and such, sometimes blending them with my own imagination. After a while I stopped working with square-sawn wood and took my inspiration from its natural shape, its colour or its grain.
Read on
The WaterWing: Dolphin-swimming
Would you like to swim like a dolphin? With a monofin on both your feet you can generate a drive that easily pushes you halfway out of the water and with a WaterWing you can almost equal the maneuverability of a dolphin.
Comparatively speaking swimming is hardly worth while. Humans are simply not built for it and the major part of our effort is lost on useless waves and slackening whirls. On the one hand water is too evasive to effectively push off from, but on the other it builds up too much resistance for a swift passage.
Accomplished swimmers know the thrust of mere flippers. It seems as if only the legs generate the drive in swimming with a monofin, but it is more than just a larger fin. The relatively simple flipper symmetry between left and right makes place for a far more refined combination of arm and leg activity. Actually this encompasses the entire body.
Read on
The Dorsal Fin
It was inevitable. In my empathic research in the realm of dolphins I had gratefully made use of the monofin. My empty hands demanded and produced the ‘WaterWing’ and for quite a while I thought this was as close as I could get. Of course the thought of a dorsal fin had been tickling my spine for a longer time, but more as a loose end, then as a serious option. Also the books unanimously ascribed it the function as course-keeper, something that only became interesting in paces that went way above mine.
Read on
A physical approach to dolphinswimming
Most of us know swimming as an activity you try to make the most of. The ratio of exertion to effect is lower and more limited than we experience in most of our actions. This is due to the fact that our bodies have not evolved towards an aquatic existence. We lack the build to deal efficiently with the resistance of water. Most experienced swimmers have felt the thrust that flippers can provide.


The monofin is more than one step further. The balance of alternating thrusts of flippers is shifted from the symmetry between left and right to the more complex relation between the propulsion of the monofin and the glidingpath. The relation between thrust and trajectory is basically one of power and balance. In the 'WaterWing' these are wed: by tilting the wing and either heaving it up or pushing it down efficient and effective propulsion is produced, while simultaniously vertical steering is rendered by its plane-like properties. The frontal resistance of the 'WaterWing' is minimal, while the resistance of the flat surfaces are variabel by inclination. Horizontal steering is not specifically related to propulsion and therefore a topic in manoeuvring.
Read on
Contact
When you have questions about me or about this website you can
e-mail me or fill in this form.