Foto's
Dolfijnreis 2002
Water
English Version
O'Pen House
Dolphin Address 2006
While the third week of the new year already scores an average website visitor stat of 184 per 24 hours (welcome aboard from all over the world) in the half-darkness of my old horse shed I am working on the foundations of the 'WaterWing Research and Development Centre'. By the end of last year I applied for a patent on the youngest improvement of the WaterWing. It turns out to be a fairly magical touch, (bio)logically derived from a tried and deeply experienced model. Hereby the wing steers more fluently into the angle desired, the propulsive volume is enlarged by surface and the 'lift-effect' is operative by means of self setting sails. The WaterWing has reached maturity at 14 years of age. I have applied for a research and development grant at an Irish development company. They also help me to find advice in production issues and in searching for a suitable manufacturer. Dusty does not know yet. She has not been seen for two and a half month and I'm frightfully looking forward to present her with the youngest version. By bottom line she is my inspiration and I would love to record her first reaction on video. About the new year, we celebrated it with sleigh rides and fireworks from the 'Teufelsberg' in Berlin and wish everyone an equally smashing beginning. Stay tuned and tell a friend, there's a lot of photo's and video's coming soon. Jan&Verena, Berlin, January 21st 2006 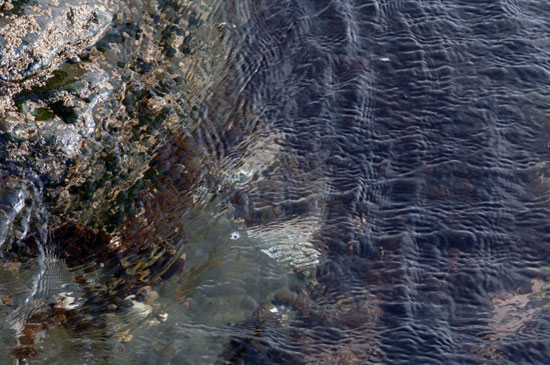 Dolphin Address 25
November 19th 2006
About every half year I come to Holland and this trip is coming up soon. I have to, because my bus has to have the compulsory annual safety check and this is only possible in Holland. Let me as swiftly as possible pass by the red tape idiocy of driving over 2000 kilometres and spending the cost of two months living on ferries for a check-up my trusted garage in Lisdoonvarna would be happy to perform in an hour for a handful of tenners, by looking forward to the pleasure of being back for a month.
Read on
Pothole escape

Dolphin Address 24
November 10th 2006
More and more e-mails rush in these days inquiring either straightforward or in a roundabout way what it is that keeps the Dolphin from her Address. And it is true, after my moving invitation to send me your support things have gone very quiet.

Dolphin Address 23
September 25th 2006
Let's have some remotely mindless fun. You remember this beetleband from a long, long time ago, your father should know, or was it your mother? I fooled around with some of their lyrical strophes, see if you can spot the odd 'seven(teen)' differences:
Read on
Foot smart

Dolphin Address 22
August 31th 2006
I walk, run and dance over 4 months now nearly every evening on the rocks and begin to feel incredibly at home there. Since a recent craniosacral therapy my agility has even accelerated and every day I long for the evening to dwell for a few hours in 'Rock Paradise'.
Read on
To date a dolphin

Dolphin Address 21
August 13th 2006
A few months ago, on one of my nocturnal web surfs, I happened upon a dating guru. He is not just flogging pick-up lines and sex-trickery, but has upgraded the meeting of the other camp into an awakening. I liked his revealing approach of imagining you to be an attractive woman and view the world from her perspective.
Read on
Intensive care

Dolphin Address 20
July 25th 2006
I slept in my van last night as close to Dusty's hide out as I could and in the evening something very peculiar happened. I was checking for internet access by a possible wireless network and I don't recall exactly what I did, but suddenly shreds of communications appeared on my screen which I managed to save.
Read on
Long live the boat!

Dolphin Address 19
July 08th 2006
At last I thought to be able to Do things again instead of ceaselessly seeking out computerisms and forgetting what exactly I tried before I just did not came through. And here I am again, downloading Quick Time, N.B., for what finally took an entire night.
Read on
Shipwrecked

Dolphin Address 18
July 01th 2006
Do not mistake understanding the 'if you learn from your mistakes you can't make enough of them'. Even more, you can go for situations that you know to go wrong sooner or later. And then pay attention!.
Read on
Inside the WaterWing revisited

Dolphin Address 17
June 23th 2006
Some of you may have been pondering the cliff hanger I left in the last edition. When you try to explain something that has developed over years of trial and error experiments you tend to leap by insight where the novice needs to proceed by tiptoe. Therefore I thought to better split up my approach in palatable steps, so time will be on your side to sink it down.
Read on
B-O-A-T evaluation

Dolphin Address 16
June 26th 2006
Willem accompanied me to Gleninah. The pier wall runs in, sheltering a shallow slipway, continued by a sandy stretch easing down. The water was crystal clear with masses of very young sand eels and a few of these nasty lamp shade jellyfish. If need be I can carry the whole boat by myself, but Willem helped me to get it down to the water. I instructed him on the Nikon and the Everio capture and got into my wetsuit.
Read on
Inside the WaterWing

Dolphin Address 15
June 21th 2006
I got to read about Einstein. There is this persistent rumour going around only ten people in the whole world can understand him. Rather than claiming to be number eleven I like to thank David Bodanis for explaining E=mcsquare to me. To many people the subconscious dolphin experience arrives several hours after the actual swim.
Read on
The crash of a crush

Dolphin Address 14
June 13th 2006
The opposable thumb is generally thought as vestigial for human development. It does indeed aptly illustrate that alleviation of physical constraint issues into the development of intelligence. An obvious exception to this is the money counting flick-through to the bottom line by Shannon Development sinking a winter of hard patience into a waste of time.
Read on
B-O-A-T

Dolphin Address 13
May 30th 2006
Some two weeks ago I found a large PVC container that had been washed up on the rocks. I punctured it with a 2mil drill and it blew out air for 5 mins. It looked flirtatiously flotatious. So I cutwheeled a hole in the hull and sat stuck in it for half an hour. Meanwhile I learned how to get out in 5 seconds. I sawed and cut a plywood all round frame to fit the barrel, mounted it with a plastic tub, a road cone protruding from its bottom.
Read on
Magical Mystery Two

Dolphin Address 12
May 6th 2006
The climbing of my years has never slowed down my interest in excitement. For quite some time now a diversion has come to my mind, focussing on the joys of inner fulfilment. Hence I came to regard getting an idea, understanding a concept or appreciating fellow human insight as an orgasm of the mind. Mind you, there is nothing porny in this, it's merely a level indicating exuberance.
Read on
Security alert

Dolphin Address 11
May 3th 2006
Since evidence suggests it must have been the hasty angler, accompanied by two young Dalmatian looking dogs and rushing off on my come-back, who threw my gear into the brine in an unwatched moment. This set me back over 1600 Euros, my underwater housing for the camcorder taking the lion's share. This made me ponder and research options to secure my landlubber belongings from criminal activity.
Read on
Rock around the clock

Dolphin Address 10
April 25th 2006
Yesterday I spoiled myself on a run on the rocks, like the two days before and today. 8 years ago I was nearly paralysed by pain in my right leg. I was operated on my back and between L4-L5 a cyst was removed. Sitting hours on end causes both my legs to ache in similar fashion, therefore I work out my legs on the rocks.
Read on
The dolphins den

Dolphin Address 09
April 19th 2006
Yesterday I spent a rainy afternoon looking for Dusty. She graced me with a 3 minute presence, chasing a water bird and keeping a stone throws distance. The rest of the time I sometimes saw her dorsal fin emerge through my binoculars in the distance. Next I was informed by a local that in the Easter weekend hundreds of day trippers had ravaged the fields, breaking down stone walls, leaving garbage and even throwing rocks at the dolphin.
Read on
Dusty???

Dolphin Address 08
April 9th 2006
On account of no tide table available yet and me not able to monitor the ocean from the shed I had to bide my time this afternoon before being able to cross the channel to High Tide Island. I ventured to cross over in wetsuit up to my armpits, but the current was savage and way too deep.
Read on
Cape Dawson

Dolphin Address 07
April 1th 2006
I was minding my own business, looking up some weird words in my dictionary, actually is was my beloved Thesaurus. I was engrossed in multitudes of synonyms when something moved in the far corner of my eye. That was such a nice surprise, no not a mouse, much larger, but it did not look like a rat at all. It was big fluffy round and it sat very still. When I averted my eyes for a blink and looked again it was gone.
Read on
Stabjack

Dolphin Address 06
March 26th 2006
I would like to close-up on a phenomenon I have reported before concerning the dolphin. In my experience figuring out something apparently magic does not only result in the satisfaction that you gain insight, it also halts your curiosity. You managed to open a door, delighted in your ingenuity, patted yourself on the shoulder and turned elsewhere.
Read on
Staff announcements

Dolphin Address 05
March 17th 2006
Regular visitors of this site may have wondered why Dolphin Address has been kind of slow lately. I have not run out of subjects or suffer from writers block. I merely have temporarily shifted focus from the word to the image. This has resulted into hundreds of photographs that illustrate the local beauty in ways that are beyond description.
Read on
Gravi-drive

Dolphin Address 04
March 1th 2006
Driving behind a snail tourist I noticed I am much more alert on road bends coming home from Ennistymon then when going there. Wondering why I found that nearly all of them go downhill. Towards Ennistymon the car slows down taking them, while going back they speed me up.
Read on
Free loading mechanism

Dolphin Address 03
January 31th 2006
It already was quite an ordeal to walk the frozen snow on the Berlin side walks, but now, after a day of melting everything is frozen over again. Like a penguin I shuffle the slippery lumps. On a parked bus a rather paranoid dolphin with a cheap little of crown over the blowhole swims above an undulating text: Delphin-Autovermietung.

Dolphin Address 02
January 26th 2006
The Berlin chill is down to minus twenty degrees and the inside of my nostrils feels sticky as we grind forward over gravel-strewn ice lumped side walks. It must be three times colder than where I cool my coke. There are only those who really need to be out on the streets and the S-bahn has an extra quality of refuge.

Dolphin Address 01
January 14th 2006
Years ago, I was still married and an active father, on holiday in France we drove by a back road. There was a random house and I remember to have said: 'Wellowell, imagine to live here, what a desertion', upon which Anne Linde said: 'But don't we live in the bush as well, dad?'
Read on