As, on my way to Holland, I pass through Dublin anyway, I was able to book an appointment at the Dental Academy before my voyage as well as on the return journey. My teeth, over time, are going to be perfectly repaired, fully for free. In exchange I make them available for education and therefore have to be on time. This is as easy as falling off a log for a Dutchman. If you have been educated at a school with the by-bell it is more than a duty to be on time, it is a matter of honour. Try to point this out to the Irish. Usually promises can be summarized by ‘First thing in the morning’ and then be prolonged daily.

Like I said, as easy as falling off a log. To drive from Fanore to Dublin takes about five hours. I had to be there at two o’clock, so I decided to leave at seven-ish, so I could put in the margin for a gas station-breakfast and, if something special would happen, capture it with my camera. I set my phone alarm at six and would go to bed at ten. But when I wanted to take my medicines I was hit by a paralysing notion. I had clean forgotten to collect my meds at the pharmacy. To leave without them was simply impossible. Chances were that I would end up in a Dutch hospital again. I cancelled my medical insurance a while ago and in spite of the European idea my Medical Card would probably not be accepted. I already pictured myself in the hospital kitchen, washing up for years to pay back for the treatment.

Finally I decided to decide something. I was going to report at the pharmacy in Lisdoonvarna at eight o’clock. Allowing half an hour for the composition of my monthly ration still left me with five and a half hours. So I would eat my breakfast behind the wheel. But the pharmacy did not open until half past nine. So I fell back on plan B: drive on to my GP in Ballyvaughan and try to organise my meds through his dispensary. This would not open until nine, but at least it was on my way. There the lion’s share of my need was not available, but the nurse suggested faxing my prescription to Gort, which was also and quite a bit further on my way. And so it did work out after all.

Meanwhile my planning had so disintegrated that it left me with only one option, to get to Dublin as fast as I could. Save one exception, just past Birr, where I overtook an overtaking car, I did, although too fast, drive reasonably safe. At two minutes past two I entered the school.

During the half hour I had to wait I pondered that if in Groningen, in a neighbourhood of average well-being, you want to park your car for a visit, there is not one parking place to be found. From that you could draw the conclusion that exactly everybody who lives there, can park their car. True to a T.

Similarly the course of my journey appeared to be: a drive straight across Ireland and an arrival on time except for two minutes. Is this so carefully ruled by a divine power, or is it an internal stretching and pushing of time and distance that I handle subconsciously?

Now my ‘operator’ originates from Palestine and emphasizes this with a headscarf. From the very beginning I have put myself at ease with the thought that the students who originate from other countries belong to the cream of their nation and were sent out to, once fully qualified, practise and spread their knowledge back home. And I could very well be right about that. At the previous, first treatment Rasha, together with her tutor, had extracted a molar that had bothered me for years. The aftermath of this lasted only three hours and was not worth taking a painkiller for. Now Palestine is a political, but even more an emotionally charged conception, which, subjected to humour, tends to evoke some kind of forbidden giggling. This struck me, when Rasha, apart from the headscarf, turned up wearing a surgical mask. It was literally on the tip of my tongue to inquire if she wanted to treat my teeth with explosives, but I did not want to push my vulnerability to the extreme.

I lay there for two and a half hours with my mouth open. Rasha had spread in an adjusted size of operation sheet so I could not close it. I was expertly anaesthetized and totally relaxed. That is a brand new experience for me as I always have dreaded the dentist to bites. I even think I slept a little, as I had all kinds of little dreams throughout. Unbelievable!

As I did not want to bother anyone with me, I decided to spend the night at the parking place at the Red Cow roundabout, from where I had taken the ‘Luas’ tram to the centre. I had paid for 24 hours and what’s more, this is Ireland and therefore possible.

But when that evening at half past nine-ish I let the engine idle to warm up the bus, suddenly a number of vans parked around me out of which men in fluorescent suits poured. Adjoining the parking lot major road works were being carried out emphasized by loud pneumatic hammering. That was no good.

Fortunately here too I had a plan B. Close to Naas stretches the Curragh, vast and undulating meadows, where I had seen people with cars having picnics. So there I parked the bus, just off the road. Wind and rain had driven the sheep under the trees. For the rest there was a pleasant silence. I played the last DVD of my newly bought ‘Planet Earth’ and let myself in peace be informed about the distressful situation our planet is in. 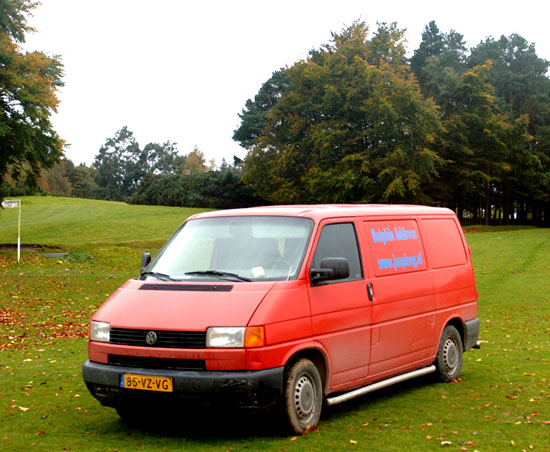 I had just closed down my computer for the night when it turned out that, in spite of my scrupulously blacked-out bus, I had drawn the attention of the authorities. Like a rabbit on holiday I suddenly found myself trapped in a crossfire of headlights. When nothing further happened I decided to take over the initiative and got out of the bus. From the shadow a sturdy military man stepped forward and inquired after my health in a rather intimidating fashion. While I put his curiosity at rest a military woman also stepped forward. Not clear if he wanted to impress me or his partner, he barked at me that I was on military territory. My face responded truly surprised, but the hippie in me said: ‘Peace, brother!’. Next he asked me my name. As the pronunciation of ‘Ploeg’ for the Irish approaches the unintelligible, I illustrated this with a flamboyant gesture to the flank of the brightly lit bus. Then the third daft question popped. What was I doing here! To this also I gave the right answer. As if stabbed by his own sting the man stepped back to his vehicle, while the lady told me I would have to move tomorrow. That too, I told her, was obvious. Thereby I van-ished from the spotlight and laid myself to rest with the secure feeling that the Irish army was watching over me. Fully free of charge of course, because that’s the game.