When for instance I have not seen Dusty for a few days the ocean begins to look empty and deserted, like an indifferent lover, a tyreless car, a mathematical problem that time after time gives a different result. But once I had moored my boat in White Strand Bay, it felt like a go-between, a phone that could ring any moment, an infrastructure in which everything knew its place.

Yesterday it began with a mild surprise. The waves were higher than I had ever swam in and the sun bounced merciless into my spying eyes. I descried the buoy and my eyes tried to model the boat from the tumbling waves.
But I do not delude myself anymore like I used to. I rather wake up in my own bed.
Fortunately it was Ian who confirmed my fearful premonition. Preceded by an enthusiastic description of how the ocean had caused havoc in the bay he struck the right chord. The waves had sprayed over the edge of the sunbathers’ meadow, which is some four metres above the average high water line. He led me, meanwhile furiously narrating how the waves had made the boulders rumbling, to a dip in the stony slope. There lay the causal result of the raw power Ian had depicted, part of the frame that had enclosed the boat, miserable and defenceless. In the shadow of my thoughts a film unrolled about how in the dark, merely lit by the waning moon, the break-away boat was mercilessly pounded on the boulders until finally this frame-part was the sole leftover of its mortal remains. 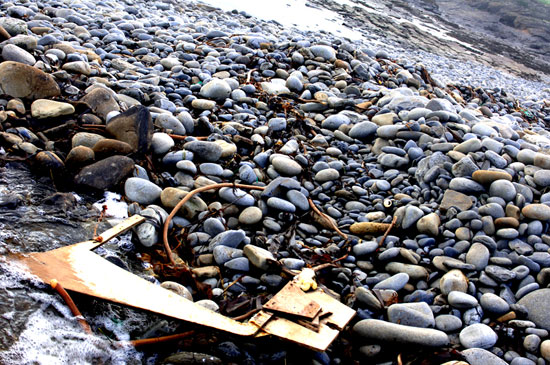 That was all. The rest was nowhere in sight. Weighed down by my thoughts about the giving and taking of the sea, the need in me rose for a final mark of honour. I slipped into my suit and wrestled through the surf. At the mooring buoy it became clear to me how this tragedy had come to pass. On the mooring rope only the meadow-pole was hanging, cruelly broken close to its base. So it was not the construction that had given in, but an organic cause, the way of all flesh, but then for a meadow pole.

A scant consolation that was no more good to me than finally deciding to look for a replacement. Thoroughly aware that it would take weeks before I could deliver a comparable contraption, I looked for something temporary that would excite Dusty’s curiosity.
One thing there were no two ways about, this I had to discuss with Noel, the owner of the campsite.

By the way, wave-wise my swim surpassed all previous ones. I was their plaything, but I was a party in my own way. Not a trace of Dusty, though.