Foto's
Dolfijnreis 2002
Water
English Version
O'Pen House
DA 2008: Unspiration
Dolphin Address 23
Juli 5th 2008
They said I should calm down now that I’m 60. Well, there was no need for that. It went as a matter of course: just a little creative dip.
You see, they said, your body does not lie. Possibly, but this has little to do with my physical body. I have been through this more often. When I worked as a sculptor there was nearly always the feeling that, whenever I had finished a piece, I would enter a black hole. You see, I worked on one sculpture for weeks, months, some times even for years. I am rather a mono-maniac, so I went for one sculpture at a time. I shared my life with my work, rose with it and took it to bed. Every free moment I filled my talk-o-matic with the latest impulse. Until after midnight I aboutisized chalk lines for the morning after.
I sawed chain, cut and chopped, gauged and sanded and when I had removed everything to come as close as possible to what I had in mind, I was finished. Officially you’re supposed to be tired but content while looking at the Accomplished and rest on your laurels.
And this is so my problem. No bravura, but idling is not my thing. I got that from my mother. I would most love to very fall in love the next day with a new idea and start up, full of energy and enthusiasm.
But this takes time. Not only was there the process of detachment, it was also the inspiration by an idea that failed me most. In literature this stage is known as unspiration (Charrue, J.B. 1948, ‘In the Arms of Gravity’, appendix 23, ‘08, Garlic Press, Westerbork). It is horrible. I soon get seized by the feeling that I have lost my creative ability. 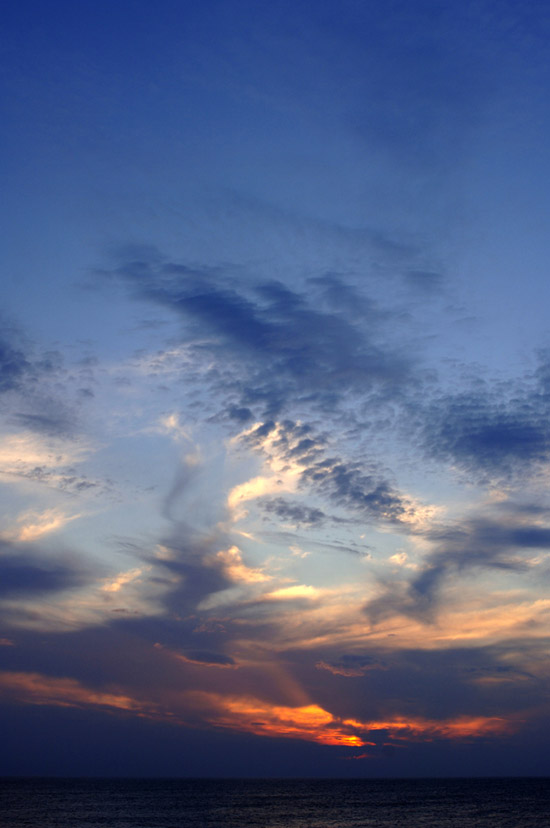 The next stage, pre-spiration, demands the courage of a lion and is characterized by utmost caution. Far too much wanting, yet just not being ready to invest patience. And you don’t fabricate an idea, it is granted. It’s closer to feeling and you have no control there.
So what to do? Lay barren, idle, bob on a time-pond, hope it will come by itself? You may have to wait a long time.
But on the other hand inspiration is a bright spark. At closer quarters you may get badly burned. The most effective approach I could find is that of gathering. I go and find a book to live in, look around me, open up to other people’s inspiration, socialize, rub shoulders with beauty, do email and websurfing.
It’s very much like building a nest. A straw here, a twig there, a thread of wool for the fun of it, everything that contributes to welcoming an idea. And when finally the nest is done, the egg will come by itself. The rest is transpiration.
This is hardly different for writing. When my mind has nothing specific going, it spontaneously begins to muse and dabble. Then, as if by themselves, concepts and reflections flow through my daydreams. Often a fitting image has gone by when all of a sudden I realise it can be of use. It’s like catching yourself on an insight. Like a dream catcher, but then one that is wide awake.
Elaborating an idea only works in a continuous logical process. But here as well Providence works. I can only type with two fingers and that is perfectly fine, as my thoughts do not go faster anyway. Moreover, I can change as much as I see fit. In sculpting this was very different, each splinter I removed was lost beyond repair.
Writing has other limitations, for instance formulation, sometimes inventing new ones that depict even better and the burden of grammar.
Once I have drawn up a text I can let English and Dutch interact. This can work in wonderful ways. For example I translate a Dutch formulation into English, if necessary with the help of a dictionary. Then I look up the English wording in my thesaurus and next translate a more accurate synonym back into Dutch. It works as well for the other way around as sometimes I first write a text in English. It is like playing ping-pong with a lingo-ball.
This looks like a puzzle, but then, when all pieces have been gathered, one that lays itself. Then my heart in joy exclaims ‘eureka’ and everything falls into place.
And then, after Willem has cast his light over it, the texts and photo go to Carola by internet and she puts it on the website in its full glory. And thus also this Dolphin Address was born.
I conclude with a staff announcement: from the 8th until the 25th of July I’m off to Holland. Again I hope to be welcomed by singing children. There I am my own dolphin again. This could yield a Dolphin Address, so stay tuned.
Jan Ploeg, Lackanishka, July 5th 2008
back
print version