Foto's
Dolfijnreis 2002
Water
English Version
O'Pen House
DA 2008: A Bridal Veil
Dolphin Address 15
June 4th 2008
Encouraged by yesterday’s exquisite swimming feast this morning I was in the White Strand water at half past six.
Upon rattling the buoy chain she stayed where she was. So I used a well-tried ruse. I found back yesteryear’s chain in my weight-belt space and shared half of it with Rod. My part, about a metre long, I hung around my neck, but this was no success, because at a steep dive it fell into the seaweed and was hard to retrieve. Therefore I stuck one half inside my weight-belt, so they rung out at every movement.

From the shore I had seen her at the farthest moored boat and when I arrived she came straight towards me. This she does more often and for the stroking I like to know if she passes me on my left or my right side. Now I am less able to manoeuvre when I am not in motion, compared to when I am. It is as if she can read my mind, as always she changes her course to the other side than the one I have guessed. 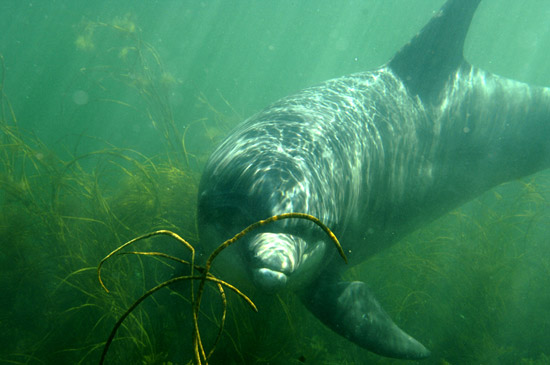 Whether it was the chain, or that she missed Ute’s or Kate’s tenderness, or that perchance she was in an affectionate mood, there is no telling. It was very clear that she wanted to be pampered. All the time she hung within my reach and let herself be stroked, scratched and cuddled.
To please her even more I searched for sea lace, but did not find more than a shabby bunch. She was not very pleased with it, as she now stayed outside my reach.
A little later she came back from a little away with an enormous bunch of sea lace, which hung from her left pectoral fin. The root stone was still attached, as if it was a price tag. I cleared it from the weeds and stuck it within my weight-belt as a trophy. With my full hand I grasped into the weed and wound as much as possible around it.
Almost immediately she turned belly-up as if she wanted to say: ‘Do it to me!’
When finally I began to swim back she kept swimming so close to me that I feared I would hit her with the mono. Once I could stand in the water I took off my monofin. Time and again the utmost point of her dorsal fin came racing by, borne by a dark shadow.
Sometimes my mask fills up with salty water. Not from the sea, but from happiness.
Jan Ploeg, Lakanishka, June 4th 2008
back
print version