Foto's
Dolfijnreis 2002
Water
English Version
O'Pen House
DA 2008: Johnny Roundabout
Dolphin Address 01
January 25th 2008
There you are. I’m back from Holland nice and tidy, after a week at my mother’s and one at my daughter and her friend’s. And the unavoidable MOT-thing. I have fortified my existence here in lots of ways, from a new cooker to a pair of water-repellent woolly warm slippers, from new briefs to ‘Grunniger kouke’ (local delicacy, sweetloaf with ginger and candied peel).
From the parking square at my mother’s until down to the Meadow is 1197.6 km. Times two, rounded up to 2400 km. Left, then right, and left again. I always tuck up my sleeve on the side I am driving. But there are catches and snags underneath the asphalt.
In ’92 at a roundabout for the very first time it was also nearly my last, as I looked the other way than a lorry came howling forward.
As my wheel is on the left, in Ireland I can drive very sharply along the outermost side of the often winding and narrow roads. This evokes a feeling of ‘laisser passer’, like ‘what more can I do?’. Worst scenario is that I drive the other side of the bus to smithereens.
In Holland, my estimate for extreme right had gone out of habit, so in urban situations and specifically in parking garages I lifted quite a few legs. And parallel parking was totally out of the question.
A similar difference is that in Holland while standing still I hardly ever had to use the brake.
On my travels between Ire- and Holland I always have to switch to the powers of catch and dare, hence the honorary nickname ‘Johnny Roundabout’.

Because of the many kinds of artificial light, like the reflection of long red stripes of rear lights on the glittering asphalt, the green comfort of a traffic light, the orange sweeps cast by streetlamps and the piercing headlights of the oncoming traffic, you hardly notice it getting light in the morning and dark in the evening.
Sometimes in a bend, an approaching car seems to come straight at you or shifting shadows suggest a part of road that doesn’t exist. 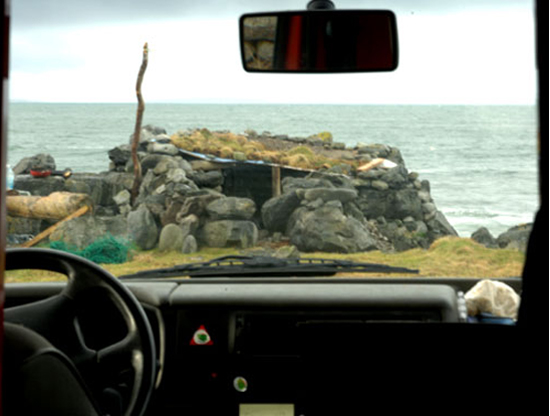 The term ‘tailback’ for a queue evokes in me the image of a scorpion killing itself by the venom in its tail. A few times I had to go heavy on the brake to avoid ramming the car in front of me.
England has quite a few sloping roadscapes from which now and then I could see the queue moving forward like an accordion. I had hoped by arriving in Harwich at 5.30 am I could beat it but the road was already like a battlefield.

Not only Germany has its ‘Rasers’, people who drive at full throttle over the ‘Autobahn’. Lots of Englishmen take to the fast lane as well. They drive by as if you are standing still while doing 120. It’s a cold comfort to realise a fast driver gets into queues more often.
Why lorries overtake each other is a mystery to me. It takes kilometres to outrun each other and the gain seems futile. Sometimes I suspect them of spiting motorists or performing a frustration because they are overtaken effortlessly by midges and Dinky Toys. Sometimes it even looks as if they purposely overtake each other in turns. Every ‘blockade’ dams up cars and can lead to heavy traffic.
Sometimes, when I snap off a piece of chocolate, take a swig of water or pick out a peppermint, my tyres rumble over the drum strip. Then my heart resounds in full fright. That is some jolt!
And if, for a split second, you look aside, you can see that the farther away something is, the slower it glides by.
What I found exciting was to see these narrow high lorries diving under bridges and flyovers with only a few centimetres’ play. Generally the awareness of distance slows one down as a mile is 1.6 times a kilometre.
Just like stonewashed jeans with rips and tears I would not be surprised when shortly car fashion will prescribe the bodywork to be dented, scratched and with a star in the windscreen. Quite a few Irish drivers, myself amongst them, have a spontaneous knack for inflicting this type of self-damage.
By the way, a totally unexpected aspect to walking upon smooth flooring is the shrieks of my sneakers. They don’t do this in the wild.
Jan Ploeg, Meadow, January 25th 2008
back
print version