Without any doubt the invention of the wheel is one of the most important in the history of mankind. Some even claim it to be the utmost important. Others invent it anew every other day, as a figure of speech. Few know the wheel played an important, if not decisive role in the building of the Egyptian pyramids. In the more sophisticated history books illustrations can be found of a pyramid under construction with slaves swarming like ants who, with combined efforts, pull blocks of stone over tree-trunks made to measure.
Yeaaars ago, a Dutch popular science magazine ran an article that rightfully can be termed as portraying the invention of the wheel. In Egyptian tombs, quarter-round pieces of wood with a deep square notch and fitted with holes had been found earlier. Initially, these findings were swept together with everything else pertaining to the Egyptian religion. Until a smart number arose and recognised that four of these parts fitted a block of stone and thus made it from square into round. Further computations revealed that the required labour force was only a tenth of what had been calculated before. That is what I call inventing the wheel!

In my career as a sculptor I made lots of inventions, but I doubt whether I’m the only one with these. Until now I’m pretty sure of my patent on the waterwing, but still I regard this find as the result of the simple pursuit of logical reasoning.

The wrecking of my boat was a severe blow and can be directly regarded as a sequel to the running aground of part of the Spanish Armada in 1588. This is remembered in the name of a village close to White Strand, called ‘Spanish Point’. Also the second part of the name ‘Miltown Malbay’ refers to an inaccessible bay. Everywhere you see gigantic climbing waves that are driven up the reefs and foam on in a cloud of white water.

As I leave for Dublin the day after tomorrow, today in fact was the last opportunity for the time being to find a replacement for my boat. Noel directed me to a tyre centre where I was allowed to look for four discarded tractor tubes in a derelict cart. At the DIY I bought a single-barrel foot pump, made in China, for cheap and two tyre repair sets.
On arrival at White Strand the valve in the first tube turned out to be ripped so badly that it could not be mended. The second one started hissing on several places after a quarter of an hour’s pumping so this one I also cast aside. The third one seemed to be all right so after an hour’s pumping I proudly laid this one on the grass. The fourth one went comparatively very fast, a bit over half an hour. Then number three had given way and a foam shower showed a leaking valve. I screwed in another valve, but the tube kept on slowly and untraceably going flat. Meanwhile number four had deflated as well, but applying foam showed the graze responsible. That one I repaired, pumped up, suit on, the tyre rolled to the beach and off to the buoy. In order to fasten the tube to the mooring rope I had cut nine rubber rings from one of the discarded tubes and with these linked in and enclosing the tyre I tied them to the buoy. 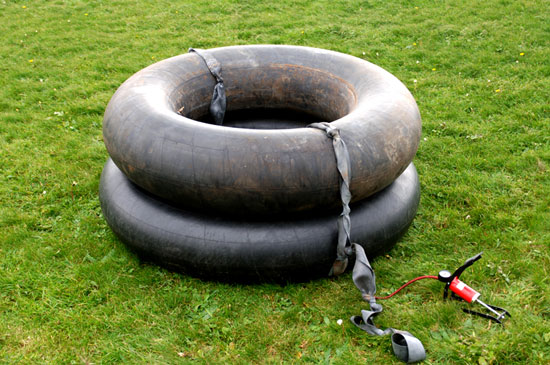 The waves had never been so high, at least from my perspective. Less than ten minutes later I heard a powerful snuff and just saw Dusty diving behind me.

Directly and with flushing cheeks I swam back to the tube, where she tried to push the rubber strings down with her beak. I did everything with the tube that I could think of and she hung there and observed me with utmost curiosity. Thus we cavorted in the midst of the power of the waves. I totally enjoyed myself, not only in that hour, but also at the prospect, because it works, here too the wheel works!