Foto's
Dolfijnreis 2002
Water
English Version
O'Pen House
DA 2008: Holy Water
Dolphin Address 28
September 21th 2008
Years ago, when I still lived on the farm, my kitchen sink was my altar. Often I would turn the tap fully open in order to, from my skilfully cupped hands, plaster myself endlessly with cold water. In my sink was a hemispherical cup with a flat pebble in it. From my cheek catch I would blow a spurt of water into it to try and wash the pebble out. The stories about this I headed: ‘Always something to adventure in that sink of mine’. I also wrote a story entitled ‘The taps in my life’. These vary from a pathetically tiny tap drop in a Groningen MacDonald’s to a whole in a rock face in the South of France where the water oozed out in ice-cold torrents. It ends with a furious attack on a Dutch filmmaker, who, in an interview about his film ‘The taste of water’ stated that water has no taste. I there argue that water tastes after yourself, unless of course you have no taste.

Except for occasionally washing the knots out of my hair and blowing two mouthfuls of cold water via my hands into my face everyday, I only shower in wintertime because then I am not soaking in the ocean on a regular basis. Now, when I go for a swim, I put a five-litre bottle wrapped in black tape in the sun, that is, when it’s out. In the cap I drilled about 50 one-millimetre holes. Above my head I hold it upside down and squeeze out little showers. There is plenty in such a bottle to totally rinse myself. A truly bright idea of Kicks. 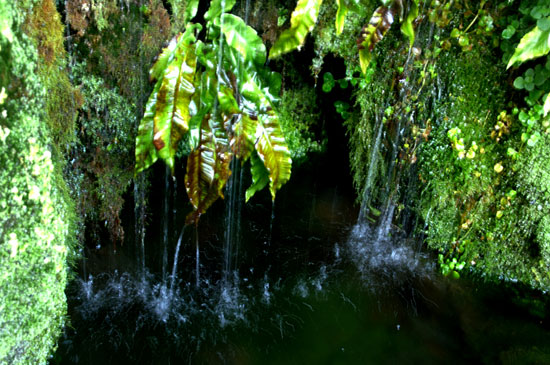 In Fanore I always filled five-litre bottles at the alleged source behind ‘The Admiral’s Rest’ and when this proved to be tap water too, rather closer by from the tap behind the siopa complex.
For three years now there has been a new water scheme under construction in Fanore. OK, this takes a while, partly as the Irish language does not have a proper word for the Spanish ‘mañana’. For such an urgent concept there is no translation.
At long last this has been achieved now and already before the target date of October 1st the pipes are running. Now the ‘old’ Fanore water was quite tasty. Only from time to time there was an e-coli bacterium in it that can make one pretty ill. But then for a few weeks I would buy five-litre bottles of water (@ three euros each) and then cautiously changed back to tap water, a box of Immodium tabs at hand for if I would get that lame feeling again. Thus I was my own guinea pig.

When last week I filled nine bottles in Fanore I did not know this was already the ‘new’ water. At White Strand I took a swig and spat it out immediately and in outrage. This was undrinkable.
It could be, as Willem cheerfully ventured, a rinse to clean up the new pipes. But what to do now? At this imminent free water shortage I remembered Rod once telling me that he got his water from a Holy Well, just outside Miltown Malbay. I followed the road he had pointed out until far enough without spotting the well. So back again and there, along a brown water peat brook there was a minute courtyard that, according to the iron letters in the gate, was called ‘St. Joseph’. You descend a steep set of stairs and walk down a pathway that loops into itself again. Everywhere there are shrines with images of Mary, holy pictures and other expressions of Catholic devotion. The Holy Well is in the centre. Through a lush vegetation of water plants, drips drop into a crystal clear pool. From there you can scoop up the water. Now I am slightly apprehensive of water simply oozing out of the earth because several times it gave me indigestion. Therefore I first took a small taste test.

My heart jumped and my palate soared to heaven. This was water, but not as I knew it. In the bottle it was emitting light and my tongue curled at the opening in ecstasy. I had never tasted such freshness and later too, when my one-litre bottle got lukewarm, the water kept its virginity. I decided on the spot: this was going to be my water. It is a bit of a tow, dragging nine bottles up the steep stairway, but on top the refreshment triumphantly washes away the exertion. How this can be I do not ponder. It is the mystic force of Holy Water.