Foto's
Dolfijnreis 2002
Water
English Version
O'Pen House
DA 2008: Dolphin Dynamics
Dolphin Address 21
June 22th 2008
Until last Thursday, I used to swim with Dusty like a senior dolphin swimmer. Easy did it, by affectionate strokes and uneventful fly-bys. I’d had no prior meditation or hysteria typical of spring cleaning, but a sudden impulse to go dynamite with Dusty again ‘like in the old days at Fanore’.
Intelligible step-by-step accounts of events that take place in three dimensions are by their nature hard to specify and even more difficult and potentially tedious to understand. Like, I am right-handed and this is consequential in that when swimming I have far greater dexterity swimming on my right side. Dusty seems to be on to this as she likes putting me on the wrong foot. Likewise I have my score of tricks to specifically attract Dusty’s attention, like swimming on my side or my back, twisting down towards the seabed, hanging on to kelp to facilitate my staying down, rattling a chain or doing rapid manoeuvres.
Two basic strategies of the dolphin are the approach from the rear and collision avoidance. A combination of these occurs in a favorite routine. We meet swimming side by side. At first she only goes a little faster and bends me ever tighter to one side, thereby describing a larger span than I do. This eventually results in her head ending up at my feet. Next she describes an even narrower circle and comes in at my other side as if to proclaim: ‘Now I’m here, so it’s your move!’ If I do not make an initial move, she swims off and often reappears in stealth, too often from a direction I do not expect to be coincidence. 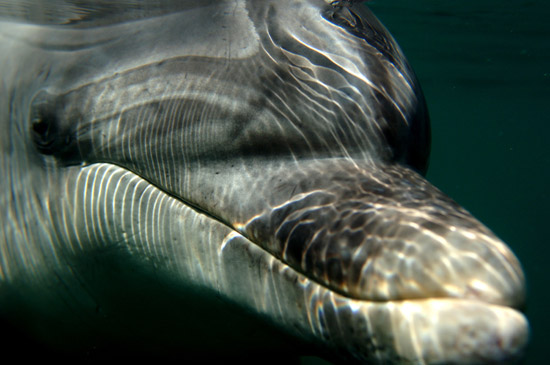 A popular opinion about her ability to anticipate human behaviour is that she can read your mind. A physical imperative for estimating distance is a view from two coordinated points of vision, the bifocal field of vision of both eyes. However, the unifocal field of vision of both separate eyes is far more extensive as they are located on either side of the head. As one eye can not estimate distance there must be a different way for sideward orientation. As she can only direct her sonar straight ahead from her melon, this can be ruled out. The question remains about her sideward orientation and opens up a whalehalla of speculation. Photographic evidence indicates tiny and complex ripple patterns projected by sunlight, which might well be produced by the emission of sound. I have ventured before to picture a ring of sound she forms around her head by shifting frequencies, to read the incoming sonic information.
Of course this does not exclude her ability to process visual information. When, for instance, I want to catch my breath after a romp I need only to turn my back to her and she leaves me in peace for a while.
Although Dusty seems to react mainly to ‘here and now’ situations, she also responds to conditions of a more complex nature. Not only has she always shown a keen interest in my monofin, but she also studies the way I swim by monitoring me from all possible positions. I suspect she recognises my understanding of the ways of water when she sees me swimming with the waves. On an arriving wave I push down backwards with the mono and when it reaches my waterwing I use the increased weight of water to heave the wing, pushing water backwards as well. Thus I exploit the energy of one wave twice. By virtue of our shared understanding of water, to a degree, we can anticipate each other’s movements.
Fortunately she likes to challenge routines by surprising actions. Suddenly I see her whacking her tail and speed out of sight. Then she jumps, higher than I’ve ever seen her do before.
During that same swim she twice releases big air bubbles under water. Any suggestions why?
Today the clouds are bursting and gales are hollering. Where has she gone, where is she now?
Jan Ploeg, Lackanishka, June 22th 2008
back
print version