Foto's
Dolfijnreis 2002
Water
English Version
O'Pen House
DA 2008: Lost and Found
Dolphin Address 16
June 9th 2008
As the water reflects the sky and the weather is good today, the White Strand water looks like a seaside resort on the Mediterranean. But when you go in, a disappointment awaits: the underwater visibility is not over 30 cm.
Imagine last week! Because of the quiet water the visibility became better bit by bit. But just when I had decided to take the camera with me the next day, the wind picked up, also coming from the wrong direction (SW). The laboriously built-up fabvizz of about 10 metres in one night lapsed into tarnished misery.
Now there are no flies on me. If it made no sense to take along the camera, I might as well try out my new 10 litre dive bottle. I had hardly been diving for about four years and did not have a stab jack, so I would have to trim on my lungs. Moreover I swam with wing and mono, so it could become an interesting afternoon.

Usually I walk into nipple-high water because there, in a sitting position, I get the mono more easily on my feet. But when I slightly bent over backwards, the weight of my bottle made me lose my balance and I let go of the monofin. I saw it sliding into the murky water and away it was.
In all kinds of ways I searched, in ever-widening circles, along the high water line, in that part of the bay where the water flows out fastest, but the mono had vanished without a trace. Somebody jokingly said that Dusty might bring the mono back, but one cannot count on that. 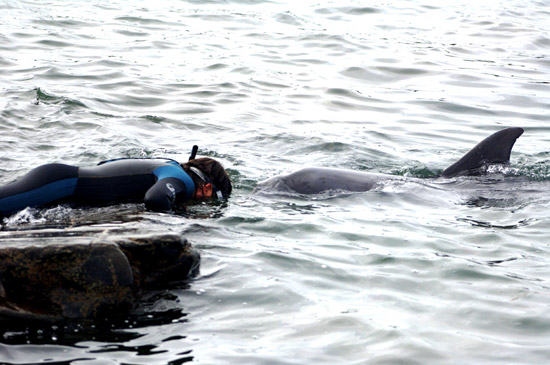 Keith en Dusty
So I got out my spare mono and widened the heel straps to get my feet in. To alleviate the pressure on my insteps I cut a cross in the rubber tops and punctured holes at the extreme ends to prevent the incisions from tearing. Of course I tried it right away and who could sketch my amazement, again I’d better do this myself, when I found this one even a lot better in swimming. Surely a blessing in disguise.
Two days later someone suddenly shouted, ‘Dusty has your monofin’. I jumped into my wetsuit and swam as fast as I could to Keith, who gestured the monofin was right underneath him.
I dived for the mono and held it with two thumbs by the heel straps so it lay between both parts of the wing. Very quietly I started to swim back. After a few strokes Dusty came to my side and showed me her teeth. When again she opened her jaws I quickly gave her back the mono. This is no matter for discussion. She balanced the wing upon her beak and shot away with it.
Now I had lost it for the second time.
Though, if I had to leave the mono, I’d rather give it to Dusty, I still felt a certain gloominess. Even though I know better, I have always felt to be a bit special to her. After all she knew this was the mono I always swam with and usually with her. How could she take it away? With listless, weary steps I ploughed out of the water.
From the shore time and again I saw Keith’s mono when he dived. Then a sailing boat appeared and took along Dusty. A bit later I saw Keith leave the water, but I did not see that he had two monofins in his hand. I only saw this when he came up the parking place and conjured my monofin from behind his own. Dusty had just left it when she swam off with the sailing boat. I could hardly believe I had got back the mono, but Keith said, ‘Now don’t let her know I was the one who brought it back.’
I nodded, because with Dusty one never knows.
Jan Ploeg, Lakanishka, June 9th 2008
back
print version