Foto's
Dolfijnreis 2002
Water
English Version
O'Pen House
DA 2008: For Real
Dolphin Address 13
May 30th 2008
Suddenly she’s there, coming from behind, as usual, and making a short turn around me. I reach out to her and she swims by, just within range and my fingers glide along her body. She nearly disappears in the underwater fog. I can just see her making a wide bend and by the white dot on her beak I know she approaches me again, head-on this time. I meet her in a flurry of bubbles as I turn to swim alongside, but in the last split second she changes her mind into a fly-by along my blind side.

I do a somersault for her attention, but again she is a shadow, dissolving in the vista.
I dive to the seabed, five metres below and run a finger through the sand ripples, looking for hidden life. I know she is about me, but do not expect her above. Her shadow falls upon me and when I go up for air she lovingly swings her fluke by a hair’s breadth from my face.
In a bit of a wave the double buoys are hard to find, so before I go in I draw a virtual line along them between two points discernable from the water. The buoys go down by a rope clad in weeds and connect to a chain allowing for the pull of the tides. I hoist up the chain by a length of the rope and drop it into a rattle. She hangs around the source of the sound, head down, nearly vertical, eyes wide open and ripe with curiosity. She turns around the clatter, near belly up as if waiting for a miracle to come. I go down again and grab hold of the chain that is anchored by several large metal weights. Thus I can, without effort, stay under water longer. Now she is enthralled by wonder. Like me she nearly sits on the seabed. Then I have to end our investigations for lack of air and shoot up to the surface. 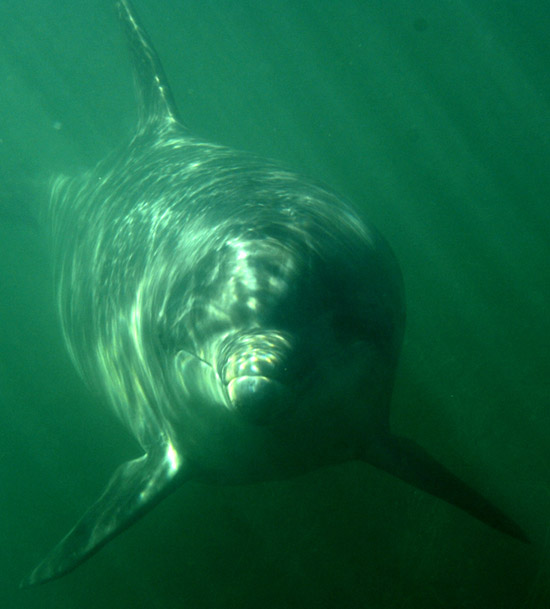 When I look down she has disappeared, leaving behind only a few coils of silvery sand.
I know she’s out there somewhere and she knows I know. I slide down and swim on my side. She appears out of nowhere and swims along on her side as if to mimic me. I spiral down to where she is already waiting for me.
At the surface I trudge through the waves, saving my strength for the dolphin. Underneath I slip into a swift and fluent glide. My breath seems endless, my flight a gift from the dolphin. She comes in colours, richer than my imagination and rare in happiness.
At the conference in Dingle there was a lot of talk, of worry, of opinion and of love for dolphins. They are the brilliant denominator, the emotive that brought us together.
But she, Dusty, is not only a beloved abstraction. She is for real.
Jan Ploeg, Lackanishka (formerly The Meadow), May 30th 2008
back
print version