Foto's
Dolfijnreis 2002
Water
English Version
O'Pen House
DA 2008: Memory lane
Dolphin Address 11
May 3th 2008
The wind whistles around the house I am minding. The hens, indignantly cackling, are blown against the inside of the wire mesh of their run. A plastic bag flies by, 22 eurocent for the environment. The sea is wearing angry white whiskers and this in an offshore wind. From the other side she must look like a huge monster gritting her teeth.
It is not hard to think back to the Ballintaggart, a stone throw from Fungi’s domain ( if you can throw far). The dying maples in the orchard camping, the peacock in al his majestic airrogance and in the kitchen pretty American girls who were always talking about somewhere else.
You had to get up early in the morning, 5 o’clock, if you wanted to swim with Fungi, because at 8 the swim boat would arrive and then the fun was over. From the road over the lane along a wall, stacked until the tiniest stone and overgrown with everything that wanted to rank on it. Potholes the size of horses and ankle-deep manure. And then, via the tiniest parking place in the world along the water, often trip-tracking, as you had more of an eye for the water and the wind played its tricks on the monofin and waterwing.
I never swam there in wetsuit and finally only watching the sea would make my skin crawl. But for swimming with Fungi this was no longer important. Compared to Dusty, he is a no-nonsense dolphin. He set the game and you had to adjust. Still he rewarded initiatives with his presence. When the tide went out I would wrestle my way against the current along the shore, turned and hightailed back, frequently accompanied by Fungi. 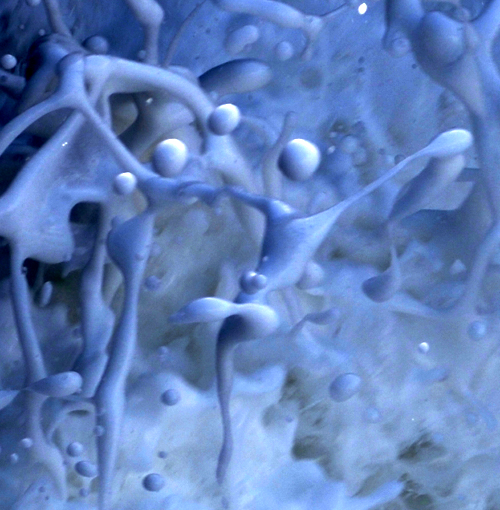 I remember very well the first and the secondest times. First I only had flippers on and I still see him right underneath me, chasing up dust from the seabed, but he did not seem to be aware of me. The second time I went in with monofin and waterwing and felt adopted by the family. In the water by Fungi, who gave me an extensive tour and when I came to the shore again by all the happy faces smiling at me.
Fungi did not come always or right away. Somehow you did not really mind. The wait was more a being, a letting know you were there, a premeditation and a break to share your love with others. This was the silent force of Fungi, the mutual bond that rose above any personal claim. May his presence, if not in the flesh, then surely in spirit watch over the course of the conference.
Dingle, 12 to 15 May, for details go to:
www.irishdolphins.com/conference
Jan Ploeg, Fanore, May 3rd 2008
back
print version