Foto's
Dolfijnreis 2002
Water
English Version
O'Pen House
DA 2008: Meadow
Dolphin Address 09
April 1th 2008
Right now the wind is blowing from the southeast and my flag rag flutters tight on the pole. Five-foot waves swell towards the rocks, are building up, trip over themselves and end their ocean voyage in sun-drenched, blinding white against a black-blue background of clouds like warships, about to run aground. The most elegant moment of a wave I find just before it crashes. Then it rises to its toes and does a somersault into its own foam. With this incoming wind the waves move against it and the spray flies from the crests as if they run on steam.
A ship sails upon the horizon. The meadow looks bedraggled; ankle deep puddles and run-in tyre tracks. In a washed-up fishbox on a rope I have towed rock chippings and dumped it on the muddy worst. Until now I have been able to cross. It will dry up nicely while I’m in Holland and hopefully grasses will grow there.
The flag rag flaps hesitantly about on a sigh of southern breeze and the waves wash aslant to the rocks. Except for the Doppler Effect that I hear at night, in the daytime I see the waves shooting along the shoreline.
A teeny-weeny bird sits on the top of my flagpole. Behind it the waves break into light and silhouette the birdie. It could be a skylark singing high in the sky, or a stone chat, talking appearently to the rocks.
In a world of stone, predominantly grey, everything that deviates is conspicuous. Amongst everywhere tiny leaves are preparing for the spring sprint. 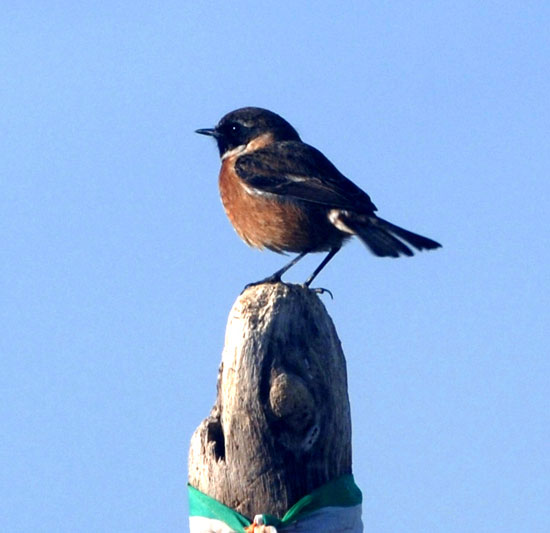 But in spite of the budding grace the wind is chilling to the bone. It looks like an end-game, the violent convulsions of a mild winter.
In Nijmegen I saw poplars with their only just opened orange leaves and in Westerbork the mountain currant trees are flowering. The magic moment in which within one day the grass leaps into spring green, was too early for me.
If you have read this far you may wonder how the Dingle conference on interactive dolphins from 12th until the 15th of May relates to all of these natural treasures. Those who know, let them speak. I just wanted to mention it.