Foto's
Dolfijnreis 2002
Water
English Version
O'Pen House
DA 2008: Mind in the water
Dolphin Address 04
February 28th 2008
Lots of people regard the dolphin as an imaginary cuddly animal. From a distance they admire her elegance and the effortless ease with which she glides through the water. All kinds of human virtues are ascribed to her, of which her intelligence seems the most impressive. Apparently we pride ourselves on our ability to think to such an extent that we are pleased to observe it elsewhere. As long as this occurs within our expectations this is more than welcome. Even if a dolphin shows behaviour we do not know, we feel the challenge to understand. Perhaps the personality of the dolphin is valued even higher. She is regarded as a free spirit and it is close to a miracle that she comes to us of her own accord. Her free will fits the intelligence picture and is highly applauded.
Until she does something we don’t like that much. Then she is suddenly a wild animal and therefore a hazard. Then suddenly we are not so happy about her free will. Then the mood turns and she is regarded as potentially dangerous. Now is this true or do we miss a vital piece of information here? 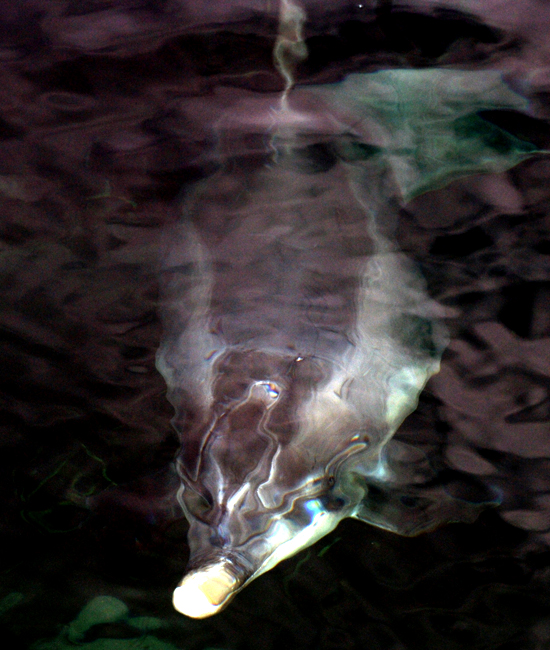 Let us take a closer look at the notorious case of the German photographer. According to his story he was attacked by Dusty. His tale inspired headlines like “Killer dolphin in Clare waters”. I did not understand how this could have happened. In the summer of 2005 thousands of people had the day of their lives by seeing Dusty, swimming with her or even touching her. What may have caused her to misbehave like this? I have been swimming with her now for seven years and with me she is always cheerful and full of trust.
From two different sources I heard what had really happened. When the German photographer wanted to go into the water with his expensive camera he was warned by several regular swimmers he’d better leave his camera ashore unless he was prepared to give it up if Dusty wanted it. She knows no difference between mine and thine. She does not first ask a fish if it wants to be eaten. Many people don’t understand this reasoning. The German photographer disregarded all warnings. Even worse, when Dusty came over he flashed her right in her face.
He did not have the courage though to mention this gross lack of respect to the press. And as bad news sells better than good news this is what got into the newspapers.
Fortunately Dusty reacts very seldom with this behaviour to show her indignity. Her most humoristic response I remember is leading an intrusive woman, who tried several times to grab her dorsal fin, into one of these floating islands that are made up of seaweed and dead jellyfish.
It is not quite fair to blame the press for the incorrect coverage. At the end of the day, the public determines what it wants to read.
May this article show that the conference on “solitary dolphins” is by no means a superfluous luxury.
12th to 15th of May.
Details on www.irishdolphins.com/conference
Jan Ploeg, meadow Fanore, February 28th 2008
back
print version